Since this program was released, Will Headlee’s performances, including additional repertoire, have been released on Raven OAR-440. Another recent recording of the Crouse organ is available on Pro Organo CD 7082. The Syracuse Holtkamp, with its stunning exposed pipes, stands at the front of an extraordinary triple-barrel-vaulted wood-panelled room and incorporates some pipework from the University’s 1889 Roosevelt instrument. The Crouse Auditorium installation was one of Holtkamp’s finest designs. It remains a stellar example of the best of both tonal and visual aspects of post-war American neo-classic organbuilding, and these new CD releases present it splendidly. The smaller Fisk University organ, unfortunately not documented on CD but here presented in special PIPEDREAMS concert recordings, also benefits from an acoustically attractive 19th-century auditorium setting and remains the first such instrument built for an African-American college. 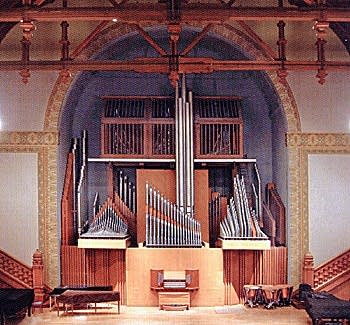