Archive of Anthony Newman at Large #0034

There’s no doubt that he’s fleet of foot and finger, but on this week’s Pipedreams broadcast Anthony Newman shows that his imagination is every bit as quick. We’ll hear him in works by Bach recorded in New York and Poland; in two concertos by Handel played with extravagant embellishments in concert with the Saint Paul Chamber Orchestra; in some French miniatures presented at the Performing Arts Center in Naples, Florida; and in several of his own compositions and in duet performances with his wife Mary Jane. Don’t miss these imaginative insights and intrepid interpretations from one of America’s foremost virtuoso talents and thinkers.

Since this program was originally issued, Mr. Newman has released two new compact discs, one devoted to Great Works for Organ by Bach on Albany TROY357, and the other, Kleos Classics CD-5107, devoted to some of his own compositions 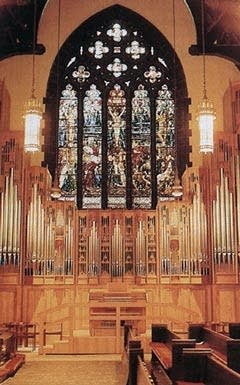