…with students from the Oberlin Conservatory and musicologist Steve Plank, we celebrate ‘live’ at Warner Hall.

This event was presented in cooperation with Cleveland’s classical music radio station, WCLV-104.9FM, and recorded March 21, 2006 by the Oberlin College Audio Department, directed by Paul Eachus.

And, by way of full disclosure, Michael Barone attended Oberlin from 1964-1968, earned a BM degree in Music History from the Conservatory, studied organ there with Haskell Thomson, who must still be bemused by how things turned out, and got his start in radio as the ‘director of classical music’ at the little student-run campus station WOBC-91.5FM, which no longer broadcasts any classical music. 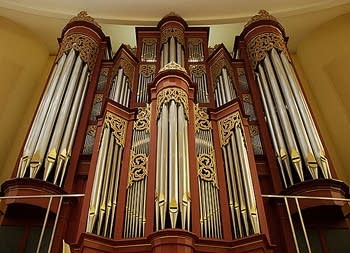