Archive of At the Walt Disney Concert Hall #1221

…solo performances of music from France, and a pair of American concertos from the American Guild of Organists’ 2004 national convention, featuring the eye- and ear-catching Glatter-Götz/Rosales organ.

The pipe organ at Walt Disney Concert Hall, with its unusual and visually memorable façade of wildly splayed pipes, was created in collaboration by architect Frank Gehry, tonal designer Manuel Rosales, and organ builder Caspar Glatter-Götz, and inaugurated in September 2004. Latry’s performances were part of the instrument’s first successful season, but the concerto performances, part of the American Guild of Organists National Convention in Los Angeles that summer, organized by the Los Angeles AGO Chapter, provided an official-unofficial ‘private prelude’ for this remarkable instrument.

UCLA organ professor Christoph Bull has produced the first CD album featuring the Walt Disney Concert Hall pipe organ. It is as unconventional and engaging as the instrument itself.

And a recently released DVD features performances by Bull and other Los Angeles soloists, plus interviews with Frank Gehry, the hall’s architect, and Manuel Rosales and Caspar Glatter-Götz, respectively the tonal-designer and builder of this iconic organ.

The next AGO National Convention takes place in Nashville, Tennessee, June 30—July 6, and is open to AGO members and non-members, either for the entire convention or on a day-by-day basis. 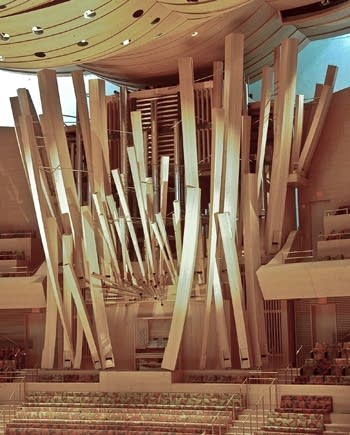