In these concerto performances, Dirk Brossé conducts the Chamber Orchestra of Philadelphia (r. 1/19/14).  He will conduct the world premiere of his new Organ Concerto in Verizon Hall with the COoP and soloist Allan Morrison on May 10, 2015.

Note that the Fred J. Cooper Memorial Organ (built by Dobson) at Verizon Hall will be featured in a sequence of special Philadelphia Orchestra concerts, The Art of the Pipe Organ (October 16-November 8), including a late-night Hallowe’en Organ Extravaganza (October 31) and a sequence of three superb concertos featuring three outstanding soloists (November 6-7-8).

The 1992 premiere performance of the Stephen Paulus Organ Concerto No. 1 is available on compact disc (Pipedreams Premieres, Volume 2).

The solo performances by Alan Morrison in works by Jongen and Wilson are available on compact disc (ACA Digital 20108). And the entire concert is available as an mp3 download, too. 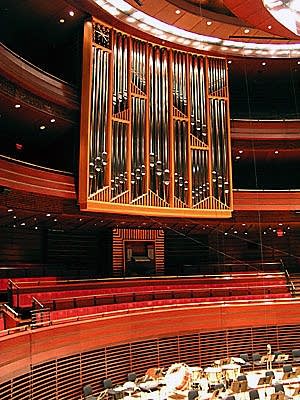