…performances on the unique 1929 Skinner pipe organ that graces the rotunda of the Cincinnati Museum Center.

The Music in the Museum series continues with 7:30 p.m. Monday performances by Benjamin Sheen, with flutist Randolph Bowman (February 29) and Thomas Murray, with the Cincinnati Choral Society (April 18).

The E. M. Skinner organ at the Cincinnati Museum Center at Union Depot is a felicitous blend of two previous instruments, the primary one (Skinner Opus 660, 45 ranks) was formerly installed at Immaculate Conception Roman Catholic Church in Philadelphia, PA. It now speaks from custom-built chambers hidden left-and-right behind grills on either side of the hallway and stairs leading to the still-functional Amtrak arrival/departure areas. Those grills formerly fronted the Union Depot’s ticket windows. To this was added, as an antiphonal division, a smaller organ formerly in the Cincinnati residence of Powell Crosley, Jr. (Skinner Opus 726, 18 ranks, augmented), which now speaks from a new chamber hidden behind a window above the entrance to the History Museum. Both instruments were built the same year as the construction of Union Depot, 1929. The entire organ is ‘under expression’ (in swell-boxes), giving it an extraordinary dynamic spectrum, from faint whisper to commanding roar!

The Music in the Museum series continues with 7:30 p.m. Monday performances by Benjamin Sheen, with flutist Randolph Bowman (February 29) and Thomas Murray, with the Cincinnati Choral Society (April 18).

Several recordings of the instrument have been issued. One features Jean-Baptiste Robin (Brilliant Classics 94726). Three additional albums, of performances by Thomas Murray (Rotunda Recordings 001) and Peter Richard Conte (Rotunda Recordings 002 and 003) are available through the Museum Gift Shop and the Organ Historical Society online catalog (http://www.ohscatalog.org)

Cincinnati Museum Center organ curator (and creator!) Harley Piltingsrud talks about some of the special precautions involved in installing the vintage Skinner pipe organs in the Union Depot's rotunda. Listen ! 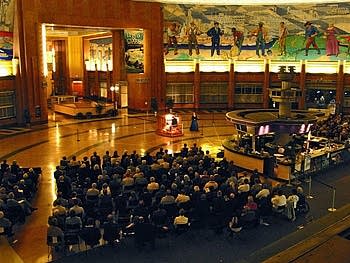