The accent is convincing, but the context? On our next Pipedreams program, we listen to a new instrument fashioned in the manner of the great organs by 19th century French builder Aristide Cavaillé-Coll. But we’re not in a famous Parisian church, rather we’re on the Ohio plains southwest of Cleveland, at Finney Chapel of Oberlin College where the C.B. Fisk company of Gloucester, Massachusetts, set out to provide students with an experience they could only otherwise achieve abroad. We celebrate in style, with solos and orchestral pieces, as faculty recitalists Haskell Thomson and David Boe show off a new instrument which adds to a teaching resource unparalleled at any other American school. Join us at Finney Chapel to savor Oberlin’s New French Fisk, this week on Pipedreams.

Oberlin Conservatory and the Westfield Center will sponsor an international summer symposium on French Romantic Organ Music, Cavaillé-Coll in Oberlin will be held on campus June 12-15, 2002. 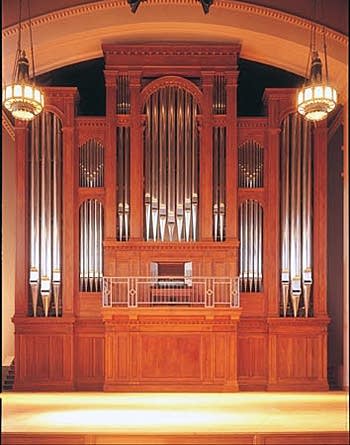