…when Edward F. Searles rescued the Boston Music Hall organ more than a century ago, did he realize he was creating a national landmark treasure?

Commissioned at a cost of $60,000 for the Boston Music Hall by community leader Jabez Upham, the innovative, German-built 1863 E.F. Walcker organ, with its imposing and impressive American-made black-walnut case and burnished tin 32-foot façade pipes, was the first ‘concert organ’ in the United States. It was, and remains, one of the most visually compelling organ designs of all time. However, its success was short-lived, and after only twenty-one years the Walcker was removed, sold twice, and eventually purchased by a wealthy Massachusetts businessman, Edward F. Searles [1841-1920], for the bargain price of $1,500. Searles then hired Henry Vaughan, architect of the National Cathedral in Washington, D.C., to design a lavish new space for the mammoth instrument. The resulting Serlo Organ Hall, for which planning began in 1899, took ten years to complete, but provided the organ with a unique setting which is both acoustically and visually stunning.

Rebuilt with electric action, the Walcker was returned to use, but only for Searles’ private entertainments during the remaining twenty years of his life. Then, in 1946, after another period of uncertainty, both building and instrument were purchased by a private community organization, the Methuen Memorial Music Hall, Inc. Almost immediately, G. Donald Harrison and the Aeolian-Skinner Organ Company were hired to reconstruct the organ according to the ‘tastes of the time’, and since then the Methuen Organ, as it now is called, has been used for an annual series of summer concerts, traditionally on Wednesday evenings, from late May through early September. The hall also is available for weddings and other social and musical applications, and has earned fame as a recording venue, too. www.mmmh.org 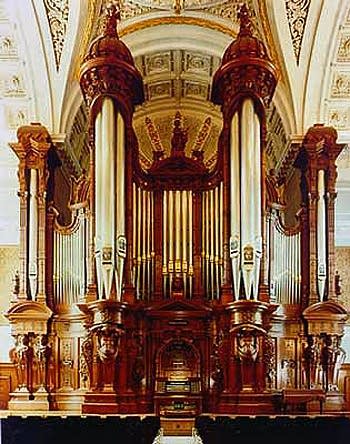